No products in the cart.

Home / About Me / About the Koorana Centre
Return to Previous Page

Many people ask me about the story of the Koorana Centre and how it came into being. So here it is to share.

When I came across a rather sad and lonely building early in 2011 I had no idea about the journey I was about to embark on and what it had lined up for me to learn. The Koorana Centre (we don’t normally have a scarecrow outside … just during the scarecrow festival!)

In the early part of 2011 I felt I was approaching a big change in my working life. My ten-year-old retail business no longer held the same resonance. I had been teaching Reiki part-time for a couple of years and enjoyed bringing groups of like-minded people together. Clearly I was being drawn to the world of self-development and felt ready to delve deeper.

I would love my own space was what I said.

Around that time two things happened.

In February 2011 I attended a week long retreat at the Arthur Findlay College to develop my mediumistic work. It was an incredible experience where our group of 120 or so participants often sat in meditation for two to three hours at a time and were allowed to become fully immersed in the world of Spirit. My path really opened up. During the first day there was a strange, but somehow familiar feeling. It was like I recognized every single person at that event.

I experienced a reading with one of the course teachers. During that reading he described a vision of me working in a very old church with red walls and dark wooden beams and, to my surprise, he said members of the congregation were my clients!

When I left, I must have held such a high vibration that for a moment I didn’t even recognise the world outside. Getting back into my car for the journey home felt peculiar, it was like the car belonged to someone else. I needed to ground myself and remember how to drive again.

Traffic on the M25 was typically slow and we came to a standstill just before the Dartford bridge. I found myself contemplating an idea in my mind and then posing the question out loud. Wouldn’t it be great to have a centre like that in mid Sussex? My friend and I seized the moment. We sat quietly and sent out an intention for that to happen. Little did we know how quickly it would arrive!

Returning home, I didn’t think much more about the idea until one day the following week on a walk in a beautiful area of woodland. Within that quiet and still space and surrounded by huge redwoods, I had a strong feeling I needed to take action.

The next day I put my retail business on the market.

I was beginning to learn about ‘letting go’; that moment of surrendering served its purpose as a way to ‘create space’ for something new to come in.

Fortunately, selling the business became my main focus for a while. I didn’t allow thoughts of ‘how’ this centre would come about to take hold in my mind. I just had a feeling and a knowing it would happen. I knew that I needed to step aside, get out of my own way and allow the Universe to do its work.

Within two months I had a text from a friend who lived in Ardingly. She mentioned that the local Victorian chapel had a for sale sign outside. I shared this news with a colleague and he suggested we take a look. At the time I had no idea he was looking for an investment.

It certainly felt like I was in my ‘flow’. Things were happening quite naturally and at a speed that really surprised me. The work I had done at Arthur Findlay must have prepared me to enter a vibration where things could and would manifest quickly.

I’ve always been sensitive. I’ve always felt energy and connected with people and spaces through the subtle realms. That ability was about to increase quite dramatically when the centre and I first met.

We walked into the space. Although it felt very cool and rather unloved, I could hear the sound of young children playing. There had been a fire some years before, caused by an electrical fault, which meant the central heating system didn’t work. Gradually the congregation had left and because attendance had been low the vicar had been moved to another post and the building had been put on the market.

A sitting tenant, the Montessori playgroup, occupied the 1950s extension and they used the main Victorian hall as their playground. There was a stack of children’s toys at the entrance, maybe in an effort to keep the space insulated! It was so cold in the building you could literally ‘see’ your breath. When we poked a little pencil through a rather damp window frame it went right through to the other side. It was clear from that moment this was going to be a major project!

In July 2011 I secured a buyer for my business, letting go of two remaining gift and lifestyle stores in the village of Lindfield.

It was at this time the name for the centre came in. I heard the name ‘Koorana’ three times during workshop and was told to look it up. I found a connection to the Aboriginal people. The word means ‘to bring forward the children’.

That I said, is perfect!

Incidently I have another story to share about Koorana, an Eygptian sun god, but that will need to wait for another time.

The space spoke. I could feel the emotions it wanted to express. Through sounds, pictures and words it revealed how it wanted to come back to life, to heal and to express itself.

Fortunately it must have also spoken to my colleague. As the owner of a local joinery business, he also felt a desire to restore the Victorian space to its former glory and keep it open to the public. His offer to buy it was accepted and after the usual round of negotiations and the surveys had been carried out, we took hold of the keys on 7th December 2011. Incidentally, he said the number 7 had always been his lucky number so it came as no surprise that we completed the sale on that day.

The restoration commenced and it took three dark and cold winter months to see progress. It was like the space needed to be turned inside out and then wrapped in her very own comfort blanket of warmth, love and protection. The walls and roof were insulated and the stained glass windows inserted into double–glazed units. Replica chandeliers were created using just a simple photo. Suddenly there was more light.

Slowly I could feel the space thaw out and as the spring bulbs began to flower in the garden I could begin to feel the space come to life. I was allowed me the briefest of visits, and always wearing a hard hat, after all most of the space was a building site.

The playgroup continued in the extension.

One evening I was invited to see how things were coming along. Little could have prepared me for how raw it felt and my whole body responded. Knowing just how sensitive I was, I heard the words, Brace yourself, just moments before I opened the wooden doors to see the floor had been completely ripped out. All I could see was bare earth.

My stomach hurt. In that moment my connection had truly been established. We were one and the same energy.

When the electric blue carpet had been pulled back a few days before, it revealed that woodworm had damaged the floor and the pulpit, so it all needed to come out. We discovered the old Victorian furnace, which would have heated the church when it was first built. A piece of wood, which had the name of the original builder written upon it was another find. It also had the date when the church had been built. I later found out that I myself had experienced a past life during that time and had most likely laid the foundation stone.

The main hall after restoration

The raw feeling gently subsided. The coldness left and I felt a sense of warmth, gratitude and hope.

Plans moved along well and the only time we experienced any kind of disagreement was in choosing a colour for the feature walls. The space wanted red, but that took six coats to accomplish. In those final stages everyone felt tired.

Huge sums had been invested and when I over-reacted to the suggestion of pink, the decorator must have thought I had lost the plot. I knew exactly what the space required.

We need a deep coral red to help our visitors feel grounded I said. 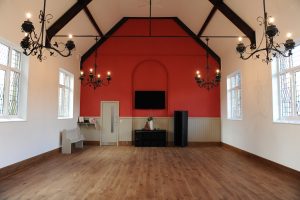 I ran a few workshops in the space before our official opening, which took place on 30 March ‘12 (my special number has always been 3, as you might have guessed and 333 corresponds to Christ Consciousness).

It was a proud moment and the beginning of a whole new chapter in my life. Gabrielle Anya Rafello

Use this form to find things you need on this site